Normally I update Wessex Professional once a year, the last update was posted in the spring (2019). But I have another update for the autumn (4.4.8).

It all came about when one of my largest users asked me if the program could be made to show the progress of a job through the workshop, and also to produce an Excel list of jobs to be done. My first thought was to produce a modified version especially for them, but thinking about it I realised that these features could be a useful for all users.

So, lets go through the new features. 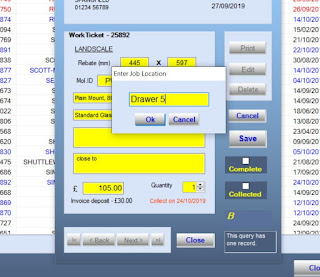 I've been using this version in my framing shop for a few months now and I'm quietly pleased with it. I hope you will be too.
Posted by Steve Hible GCF(APF)adv at 22:19 2 comments:

A bit extra to the previous post , which describes how to change over Frinton mouldings to Wessex.

There is an (initially) perplexing problem where it seems that some Frinton mouldings have been marked as "discontinued" incorrectly.
"Oh dear!" I thought (or something close) when this turned up on my work computer.
As always it's wise to be like Corporal Jones and "Don't Panic".
After little sober reflection I realised that the problem lies with mouldings that were sold by both Wessex and Frinton and had a Wessex reference and a (different) Frinton reference.

So, to clarify - the moulding which showed as "discontinued" for me was (in my moulding records) Frinton M03021. Now Wessex also have this listed, and their reference is "C2105" and this is the reference used in the update file.

How to sort this out? I have come up with 2 scenarios.

The first is if you use the supplier's reference as the moulding ID. Simply change the label on your chevron to the Wessex number.

The second is if you use a different ID from the supplier number (for me that moulding was "117"), then you can edit the record to change the Supplier & Supplier Number.

The good thing about the second method is that all the job records which have used that moulding are changed too. Whereas in the first method they will still have the original ID, so it's probably best to edit the record and put the Wessex reference in the Notes section.

The records that start "WF", "PW" & "POL" are not affected, but if you come across an odd "Discontinued" best to give Wessex a ring just to check.
Posted by Steve Hible GCF(APF)adv at 16:47 No comments:

As you have probably seen Frinton Mouldings are now being merged with Wessex Pictures.
This means that in future the mouldings that used to be listed under Frinton will now be listed under Wessex.
Only one update file will be issued (WessexMouldings.xls).

So, how can we get the program (WPP4) to sort this out?
Fortunately it is quite simple.

Do this by going to -

Now you are upto date.

Just in time for the Roadshows we've released the latest version of Wessex Professional.
The changes and new features are really down to the fantastic response from the users of the program.


The option to update from a supplier other than Wessex or Frinton is now a dropdown list of the existing suppliers in the database. This is to minimise errors (spelling, or calling the same supplier by two different names).
However this does mean that if you want to add mouldings from a completely new supplier you will have to create one new record manually ("Tools">"Manage Database">"Mouldings", then click "File">"New Record"). This will then add that supplier to the dropdown list.

4. Two new database utilities have been added. These can be found in "Setup">"Options" and select the database tab, click "Database Utilities" (at the top left of the tab). NB. It is wise to have made a backup of your database before making any changes.

5. When "Editing" or "Adding" a moulding record you can choose from a list of existing suppliers in the database, or add a new one.

Hope you feel, as I do, that the changes make the program more productive and user-friendly - enjoy!
Posted by Steve Hible GCF(APF)adv at 14:00 No comments:

A couple of framers have contacted me recently with problems trying to update mouldings from a supplier's list.
At first glance everything looked good.
The file was ".xls".
The headings were all correct.
There were no blanks in the list.
The worksheet was titled "gen"

Looking more closely I noticed that one of the files contained apostrophes in the description (why?). 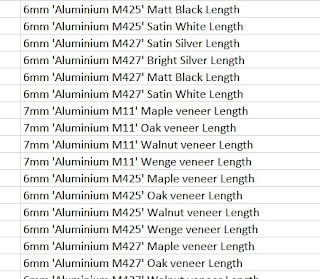 While the other had the width as a decimal. (The last column in the screenshot).

Both of these things will cause the update to fail.

The solution?
For now you will need to edit the data from within Excel.
In the first instance (the apostrophes), in Excel, select the column, click on "Find & Select", then "Replace" and follow the prompts.

For the second (the Width as a decimal number), select the column, click on "Number". It will be shown as "General", change this to "Number". Then click twice on "Decrease Decimal" (see below) 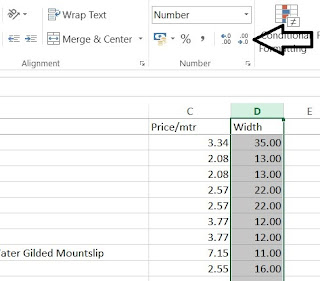 The numbers will change to integers (ie. no decimal point).
Save the file, and all should be well.

The next version of the the program (look out for version 4.4.7 in the next few weeks) will handle all this automatically.