You may have noticed that the App has had some more updates quickly following on the main update (to version 2.0.0) issued last month.
So what's going on?
The first 2 updates (2.0.1 & 2.0.2) fixed a mistake in the App where, if an Extra Cost was entered in the Sundries list, it wasn't read properly and returned zero. The first update fixed it for most of us, but then I realised that if the currency symbol was placed at the end of the amount (ie 34.56€) the figure still would return zero. This led to the second update which fixed this.
I also took the opportunity to make it easier to see which dimension box you were about to enter data (rebate size). The hint in that box (Cm or Inches) changes colour when it is ready for you to enter the size.
That was all thanks to discussions with users at the Art & Framing Roadshows.

The last (for a while, I hope) update (2.0.3) makes it easier to update the Mouldings.csv file.
The problem was that if a new "Mouldings.csv" file was copied to the Download folder (or any other folder) and there was an earlier version(s) of the file already there, then the new file would be labelled "Mouldings(1).csv", or "Mouldings(2).csv" and so on.
As the App was programmed to only look for "Mouldings.csv" it was quite easy to use an old file by mistake to update the App. The answer was to delete the old file(s) first, then download the newest file. (A bit of a faff).
So, what's changed?
Now, when the App looks for the update file it will show you all the csv files in that folder.
Also, the title of the file can now be whatever you like ("wessex_arq.csv" for instance). 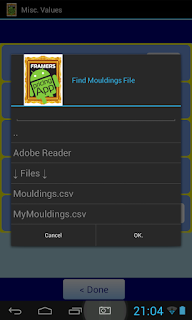 Simply select (tap) the file you want to use, and then tap "OK".
This should make updating the moulding data much easier.

An extra piece of info - In the latest versions of Android (version 5 onwards) the SD card is not shown when looking through folders (a "security" feature, thanks Android). So make sure you always copy (download) the file into the "Download" folder.
Posted by Steve Hible GCF(APF)adv at 15:49 No comments: