At the last NEC Spring Fair (2011) I confidently expected that we had the definitive version of Wessex Professional. I'd even started on the groundwork of a completely new program (which at the moment goes by the highly original name of "WPP6"), but it wasn't to be. As usual it was customer feedback that provided the spur. "Why can't the program do x?" or "It would be nice if it did y." or worse "Surely it's incorrect when it does z." So, development has continued and the result (instead of being held until the NEC 2012) has just been posted on the Wessex website (25/11/11).
The new version is 4.2.0 and I thought it might be good to look at the new features. 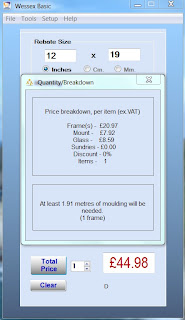 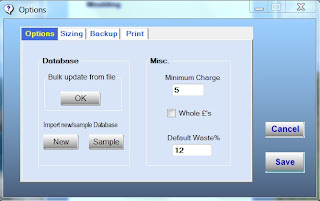 Also there have been lots of little "fiddley" changes. For instance, when printing an invoice the program will now put a full stop after "Mr" or "Mrs", but not after "Lord or Lady", or say you have 5 jobs on one invoice and the customer decides not to go ahead with number 3, instead of ending up with Job 1, 2, 4, 5, they are now renumbered 1 to 4.

So, a Christmas present to all our users. Go to the Wessex website and download this (free) update. Make sure you've made a copy of your database & labels/values files. Install and marvel enjoy!

Just think about it people!

Some ideas are awfully seductive and really look the business, that is until you actually have a think about what the implications are.
One of those is the idea that a frame pricing program could produce a price from your hourly rate. Gosh, that sound good doesn't it? So, if you award yourself a pay rise, all you have to do is up the hourly rate.

Let's examine this for a moment. -
In order for the program to produce the price it has to know how long it takes you to do various jobs. Now I've been a framer for 35 years and still find that sometimes (with a following wind) I can cut a mount in under 10 minutes from start to finish, whereas other times it can take well over half an hour, because (choose one or more) there was a mark on the board, the customer's work was measured wrongly, there was a mistake in the maths, the wrong colour was used etc. etc.
Multiply that by all the other items that go into making up a frame and this hourly rate idea doesn't look quite so good.
Also, different staff members are likely to take different times to perform the various jobs. One might be able to cut and join frames really quickly, but take an age to fit up the work. Sure, a program could be written that could cope with all that, but it would be so complex as to be unworkable.

As for the idea of awarding yourself a pay rise by upping the hourly rate, well it just doesn't work like that. - Your wage rises come from extra profit, and that isn't achieved by making a change in a computer program. It comes from extra turnover and/or higher quality framing. It's something that needs to be actively planned and worked for.

All the above is why the Wessex Pricing Program works from the other end of the price - the price charged to the customer. It makes setting up the program much simpler and copes with many of the pricing anomalies that creep into framing. It also makes you the framer take responsibility for your prices and not abdicate that responsibility to a computer program.

So, in conclusion, if you are the sort of framer who turns out frames like widgets on a factory production line and enjoys fiddling with computers - go for the hourly rate option, the real framers amongst us know better.
Posted by Steve Hible GCF(APF)adv at 14:45 No comments: