On The Road Again

Well, the band is back together again,
It's got some brilliant new members.
There are some great new numbers.
Old favorites have been given an extra polish.
The tour dates are set, the venues booked.
The hotels warned.
The Art & Framing Roadshow is go! 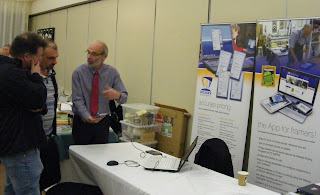 I'm really looking forward to meeting and talking with all the visitors.
See you there!

We've just posted the latest version (4.4.2) of Wessex Professional for people to download.
I thought it would be a good idea to go through the main changes.

NB. As with all Wessex Professional upgrades, if you don't want to engage with the new features you can just go on using it exactly as before.

The Wessex Pricing Program in all its many guises (from WPP1) has always used the same algorithm to work out a price, - a variable cost added to a base cost. It helps if you think of the base cost as a cutting charge and the variable cost as the material (charged to the customer).
With me so far?
Now while this is a very straightforward and flexible way to work out a price, the very observant amongst you will have noticed that it doesn't quite reflect the reality of some types of framing.
For instance, an expensive moulding may not need the same markup as a cheap one, but will need a higher base cost to reflect the extra time to cut and join it. Waterwhite glass is another obvious item. On the other hand a cheap moulding probably needs a higher markup to make a worthwhile profit.

Enter the new upgraded program that will make your pricing even more flexible.
Now you can give items their own base cost, rather than having to use one that covers all the glass/mount options.
You can also give each individual moulding record its own base cost and markup (or just accept the default).
The database and labels files are automatically upgraded (as would be any that were imported at a later date). Note, these upgraded file cannot be used in previous versions of WPP4.

Below are 2 screenshots of the changes that should be self-explanatory. 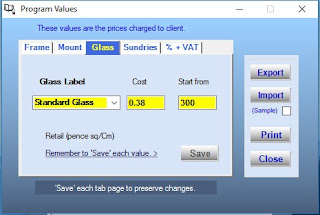 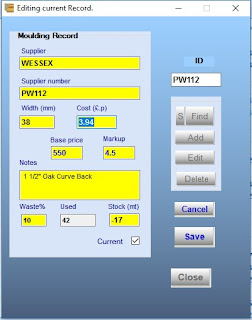 Note, in the moulding record if the default Base price and Markup are being used, the text in those boxes is blue, if you have put a non-default value then it is black.
There have also been some changes in the background that should make the program easier to use and more reliable.
Enjoy!