I'm pleased to reveal that after 2 years development Wessex Premier Professional will be released at the Spring Fair in February 2010 at the NEC.
It's a major redesign of Wessex Premier, as well as being two programs in one. You can start off with the Basic version which issues prices and just uses the Mouldings part of the database. Then, when ready, you can upgrade to the Full version which keeps track of Work Tickets, Invoices and so on. All the records, labels and values from the Basic version are carried across thus making upgrading as painless as possible. 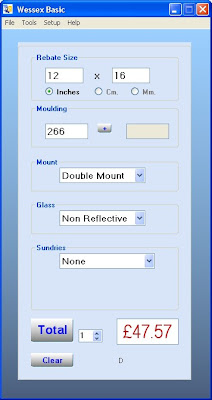 Above is a screenshot of the main form of the Basic version.
The main form of the Full version will be familiar to all who know the original Wessex Premier. Its layout has proved to be easy to use and understand as well as being versatile. 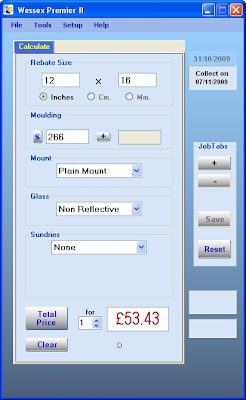 The Full version has many new features, which I won't detail here except to say that none of the features have been included for their own sake - they all help to make the program quicker, more productive and easier to use.

For those of you interested in the technical details - The program has been written in VB 2008, and uses the .Net Framework 2.0. This enables the program to be restarted programmatically, and I don't need to use a third party control for the menustrip customization.
Perhaps the bit I'm most pleased with is something you hardly notice - the buttons, I haven't counted but there must be about 50 of them in the program. Previously the graded shading on them was achieved calling a sub-routine every time the control was "painted" (ie. many time a second). Now I've written a custom control which does this and more (the lettering moves to indicate the button has been clicked and a dotted line appears when the button "has focus"). By including this new control the final compiled program was some 25% smaller, all contributing to the efficiency of the new program.


We've been using this new version of Wessex Premier in our shop since the summer and have been really pleased, I certainly wouldn't go back to the previous version.
So I look forward to talking about it to people at the Spring Fair.
Posted by Steve Hible GCF(APF)adv at 08:00 No comments: